Its ironic that the average music fan is so conversant with the music of the USA. From the days of Trad Jazz we have looked to the states for inspiration and we are are far more likely to be aware of the nuances of music from New Orleans, Nashville Memphis Detroit or San Francisco than Germany, France or Sweden.

There’s a reason for that of course, most European Rock music is pretty Dire. I spent a few years when my kids were young going to European camping resorts. In the evenings there would be entertainment in the form of games and music. The music was standard Europop of course which the kids and most of the adults really loved. On the continent clapping your hands is pretty much seen as entertainment in itself and the Eurobeat certainly lent itself to hand clapping. As the evening progressed the Rock Music would start which compromised of Europe’s ‘The Final Countdown’ followed by more tracks that sounded like Europe’s ‘The Final Countdown’.

At least the weather was good.

From the days of the Beatles in Hamburg it was a well accepted fact by everyone (but especially the British) that if you wanted rock done well you had to import it which is why to this day old Rockers who couldn’t fill the local pub back home still make a good living playing Germany.

However in the early 70s there were a couple of bands who challenged that concept.

Just over the sea is a country called Holland, its flat and clean and bikes are very popular there. I had been to Holland many times because it was a feasible day trip from where we lived in Germany. Really that was the main reason for going there, Germany was very clean and Norfolk was pretty flat so looking at bikes followed by the experience of eating chips (in a cone!) with mayonnaise was really the only fresh entertainment for my 10 year old self. Little did I know that two world class bands were forming just a few miles away as I licked the salt off my fingers. 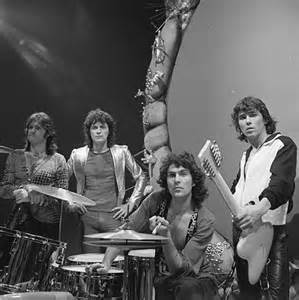 Golden Earring has actually been in existence since 1961. In the 60’s they sounded like a British band that for some reason you had never heard of, a bit like the Ruttles except real. Just like the British Bands they went from being a Beat Combo to introducing a bit of experimentation and psychedelia as the decade wore on. As the 70’s dawned they were ready to ditch the Sitars and move into something a bit heavier. In many respects they were a Dutch version of the Hollies (not a back handed compliment, as far as I am concerned the Hollies were the third best band to come out of Manchester). They were helped by Cesar Zuiderwijk joining the band on Drums in 1970. Zuiderwijk was, and is, a fantastic drummer had had all the technique and more as well as being able to introduce just the right amount of swing which was something lacking in most British Bands of the time. Along with Zuiderwijk we had George Kooymans on guitar and vocals (who had formed the band at the age of 13!),Rinus Gerritsen on bass and vocals and finally Barry Hay who did most of the singing as well as a bit of guitar when needed. The core line up never changed again which makes the Earring the second oldest band line up (ZZ Top being the longest, there’s only three of them and lets face it they could be anyone behind those beards).

Its up there with the Door’s ‘LA Woman’ in terms of desperate driving songs. In the middle of it Zuiderwijk comes up with that rarest of things, a drum solo you can dance to. Best of all at the end he was prone to jump over the kit at the climax of the song, something I still marvel at (I’ve tried it but only once). As his kit was invariably on a riser this was pretty much an incredible feat especially night after night.
Here they are doing the song live with the sort of confidence you only get from a band with 10 years gigging experience.

‘Radar Love’ took the band as far as the USA where they toured with the likes of The Doobie Brothers and King Crimson (??????). If fact this might be the reason we’ve never heard much from them again as they were really busy. This came to an end in 1984 when 8 teenagers were killed at a theme park where the band were playing, This was nothing to actually do with the band but they never toured the states again. There was an element of Karma here, ‘When the Lady Smiles’ was their international hit that year. It was a competent piece of AOR. The video however portrayed the attempted rape of a nun, a combination of Dutch Liberalism and American crassness which is just wrong, they missed a trick however if you take the rape element out it would have been a really funny video with Zuiderwijk doing a great turn as a psychiatrist but MTV was sufficiently sensitive to ban it.

The band simply returned to being huge in Europe and gigging like it had gone out of fashion. They are still around today and in surprisingly good shape for a band well over 50 years old. Their gigging has slowed down a bit as Barry Hay lives in the Caribbean and presumably enjoys his time off so the band operate on a one month on one month off policy.

Compared with Golden Earring’s stability and work ethic Focus was a hotbed of intrigue and exhaustion. The two main members of the group were smartarse singer,keyboard player and flautist Thijs van Leer and taciturn guitarist Jan Akkerman. Both amazingly talented musicians who got together to record their first album in 1970. Their casual approach to band membership started right from the beginning when Akkerman left Focus to form anther group with drummer Pierre van der Linden. Van Leer then left Focus to join the new band which they called..Focus. 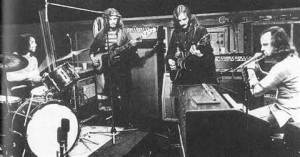 So after recruiting bass player Cyril Havermans a new album was recorded. The highlight of that record and indeed the band’s career was ‘Hocus Pocus’. Now as far as I am concerned if you cant derive some enjoyment from this track there is something seriously wrong with you, its got flute riffs, drum breaks,manic guitar and silly singing.

The next hit was every bit as good as far as I am concerned. ‘Sylvia’ is an updated Shadows type guitar instrumental, it sounds simple until you try to play it properly and there a lovely warm swell of organ underpinning it all, even Van Leer’s obligatory yodelling sounds just fine.

At this point the band were firing on all cylinders, but by 1974 they were loosing focus (ha!).The band were apparently knackered and spent most of a fortnights recording sleeping instead. Van Leer then contracted appendicitis and then he and Akkerman decided to get rid of Van Der Linden. They got rid of the great drummer because they thought he was too jazzy, they were now chasing the big bucks and wanted a bit more commercial success. Already Bert Ruiter had taken over on bass and he was joined for a while by British drummer Colin Allen who was more of a rock player.
Things were going tits up rapidly. The tunes were becoming blander and the hallucinatory madness of ‘Hocus Pocus’ was a distant memory. Van Leer and Akkerman were starting to cherry pick some of the best stuff for their own projects and by Mother Focus in 75 most of the tunes were being composed by the bass player , usually a sign of impending doom unless you’re in a band with Paul Mcartney.

In 76 Akkerman was fired from the group and really no one cared that much anymore.

SO here they are at the height of their powers playing their two best songs live on The Old Grey Whistle Test. They are tearing through their ‘hits’ with scant regard for the originals and even find time to wish us a ‘Merry Christmas’ .Rock doesn’t get much better than this

Of course as we all know by now that couldn’t be the end, Van Leer eventually reformed the band with only him as the original member although he’s managed to lure Van Der Linden back,(I would like to think that Van Der Linden insists on a 20 minute freeform drum solo every night as retribution for his dismissal all those years ago). Their legacy is slight really, most of their album tracks are progish and a bit bland or just a bit bland.’House of the King’ used to crop up as a theme tune now and again most notably for Steve Coogan’s ‘Saxondale’ although almost anybody who gives a monkeys will think it’s Jethro Tull.

Those two tracks that caught the record buying public’s imagination are just totally brilliant though.