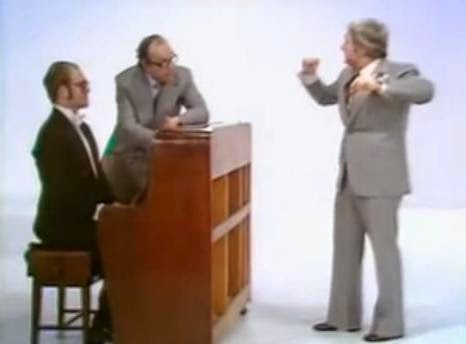 My grandfather Russell, my mother’s father, was a typical old Norfolk ‘boy’. Dry as a stick he knew what he liked and he liked what he knew.Now he was In his 60’s he certainly wasn’t up for new experiences.He didn’t like vegetables that was certain, if my mum ever produced a salad he would have a selection of cold meats, this wouldn’t include corned beef as he considered this to be horse meat. ‘Eat enough of that and next time someone crack a whip you’ll break into a gallop’ was his oft repeated response. He was fond of such folksy wisdom and would repeat such sayings at least once every visit. Along with these his main contribution to the culture of our gatherings would be to break into a music hall song ‘Daisy Daisy’,’Where do flys go in the Winter Time?’, ‘The man who broke the bank at Monte Carlo’ ,by the time I hit puberty my mental collection of music hall songs was considerably more advanced than that of  the average teenager.

Russell had been a plumber and also a talented woodworker but when he retired his main interests became smoking and watching the television. In his idiosyncratic and stubborn way he would only watch ITV or Anglia as he called it. One thing he hated more than switching channels was actually switching it off so the TV was on from tea time to when service ended and the little dot faded to blackness. There appeared to be little enjoyment to be derived from any of the programmes. With one exception the end of each show would be greeted with ‘well that was threepenoth of tripe’ or ‘that was a load of squit’. Every show without fail, every night, six hours a night. Evenings were long in my grandparents house.

The exception to his low opinion was,of all things, ‘University Challenge’.Russell seemed to genuinely enjoy the weekly challenge of mind’s hosted by the impossibly named Bamber Gascoigne. I suspect that he never actually answered one question on the show but of course he had a standard response. At the end the hairy students would wave their cuddly mascots at the camera and he would announce ‘those toys have got more brains than most of that lot’.

And so every couple of years my ganddad and nana would be spending christmas day with us. This was fine as far as I was concerned, in the early 1970’s we had been parted from them for most of three years so my capacity to find Russell irritating was reduced by lack of repetition. Most of my mum’s side of the family were deeply conservative people. My grandparents had barely left Norfolk and only occasionally would they make journeys as far afield as Suffolk or Lincolnshire.The other slightly strange thing about virtually all my family was the fact that no one really drank alcohol. Not for moral or religious reasons, they just didnt. We would invariably have a bottle of vermouth or something in the pantry but the level remain pretty much the same over the so called festive period. So although the lack of alcohol meant family sing songs were low on the agenda so were rows and stabbings, invariably our elderly guests would be taken home by about 10pm worn out by a hard day sat in an armchair. My grandad made up for the lack of alcohol by smoking constantly, in those days making any consession to non smokers would have been seen as actually quite insulting to those who were puffing away, People would acually flick ash over sleeping babies without a second thought. Our front room was so small one cigarette could reduce visability to a couple of yards but no one would have ever dreamed of telling Russell to go outside.

Again the main entertainment was the television, after a couple of years we got one of those new colour sets and I was so unused to the sensory overload that it actually made me quite queasy for the first couple of months.My Grandad would be pushed well out of his comfort zone with the unfamiliar holday scedualling and the so the presence of two extra channels must have driven him to the edge of madness.

The compulsive viewing was, of course, The Morecambe and Wise Chistmas show which meant introducing my Granddad to the unfamiliar BBC1 (The duo switched to ITV in 1978 and immediately lost a lot of appeal but it made family get together’s easier). You have to go a long way to find anyone who really dislikes Morcambe and Wise. If its one thing the BBC love it’s telling us how good they used to be but as far as I am concerned the other comedy jewels such as ‘Dads Army’ or ‘Only Fools and Horses’ are overinflated period pieces. Morcambe and Wise though have stood the test of time largely I assume though the sheer comic brilliance of the two comics. Ironically Morcambe and Wise has their roots in the period where musical hall morphed into variety, their roots where not that far from my Grandad’s but they had managed to subvert the gendre into something more interesting and funnier.

Just to go off piste for a minute. In 1979 Squeeze recorded their own rather untuneful Christmas single which mentioned Mary and Joseph in the same line as Morcambe and Wise and got quite a bit of stick for daring to link religious and comic characters.

At least we know Morecambe and Wise were real people

And so here’s some clips featuring last week’s subject Elton John. For a while Elton was up for this type of thing and rather good he was too. Even at this point for some reason he was regarded as better family fodder than his peers, it was unlikely that we were going to see Mick Jagger, David Bowie or Iggy Pop going through a comic skit but I thinks thats to Elton’s credit. On the first clip I found I actually laughed out loud and I only usualy do that twice a year.However a couple of days later its disappeared and appears to have been blocked by the BBC so merry Christmas to them!!!

A couple of years later and Elton’s got more hair and a hat.He’s great in this and his performance at the end with Eric and Ernie in drag is actually rather poignant.

If you’ve been affected by any of the issues in this week’s blog you can also find me on Facebook and Twitter where I share things when I cant be arsed with the idiosyncrasies of WordPress.

Please feel free to join me

Like Loading...
This entry was posted in rock music and tagged 70's biography, Christmas television, elton john, morecambe and wise. Bookmark the permalink.