For a long while Detroit has held a fascination for me. It’s not exactly on the tourist trail so I am probably not ever going to visit. I imagine that in Detroit it is always winter and everyone is driving through the slush in huge decrepit gas guzzling cars. As soon as you park some punk will steal your hub caps and if you confront them they will threaten to ‘pop a cap in your ass’. 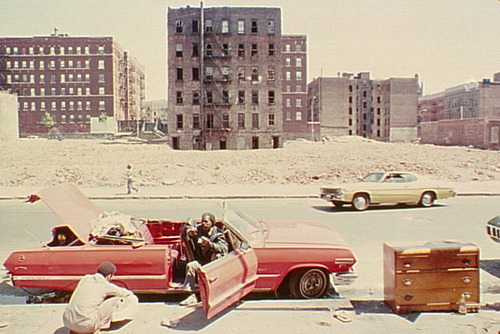 To be honest in my imagination I get Detroit and Chicago muddled up but I do know that Chicago offers Blues and Detroit is the home of Tamla Motown, the only sort of music (apart from ska) that everyone likes.

Detroit is also the home of no nonsense, blue collar rock and roll, the sort of place that Springsteen should have come from but that would have resulted in his career probably amounting to diddly squat in Europe. Bob Seeger is a classic point, his rabid rocker, the best song Chuck Berry never wrote, and ‘get out of Denver’ was covered by the Hot Rods who recognised a good song when they heard one. Seeger had a couple of minor hits in the UK but he didn’t really capture our imaginations probably because we were not driving about in slush filled streets in huge cars.

Anyway back to Punk

The Stooges apparently came from Ann Arbour which I believe has a university which makes it a bit less blue collar and a bit more bohemian but according to my map its virtually a suburb of Detroit. Like the MC5 they had become a legend without, I suspect, that many people getting to hear them in their lifetime. This was largely, initially, due to the fact that the hipper music journalists tended to ‘dig’ them, Nick Kent in particular was a huge fan.

For a couple of years I was far more familiar with them on a pictorial than a musical level due to lead singer Iggy Pop’s stage antics, the picture below must be one of the all-time greats.

And so, legend had it, Iggy was smearing himself with peanut butter, or cutting himself, or stripping off or getting beaten up by the crowd. With an act like that it didn’t matter too much what the music was like but it was described (remember I couldn’t actually get to hear it) as moronic, brilliant three chord rock and roll.

Apparently it wasn’t always like that, Iggy has started the band with brothers Ron and Scott Ashton and a friend of theirs Dave Alexander as an experimental venture, they were even called the Psychedelic Stooges in 1968.

Their first album, which I only got to hear thirty years later, set the template for what we like to imagine as the Stooges sound but to buy into its greatness you have to ignore the 10 minutes of drone rock (‘we will fall’) and also the fact that about half the album was written the night before recording. Which essentially leaves ‘I Wanna be your Dog’, ‘1969’ and ‘No Fun’ to establish a reputation on.

Fun House, which I only got to hear 40 years later is a bit more consistent and features some Sax playing from new guy Steve MacKay which provides a bit of light relief.

Perhaps hearing this music so long after the event has diminished its power. Ron Ashton’s guitar playing still has a certain pizzazz which sounds quite revolutionary but the rhythm section seems distinctly underpowered in the mix.

I had a more contemporary introduction to the band in 1976 though when I actually went out and bought a copy of Raw Power, only three years after the event this time.

At the time of this recording the Stooges had already split and Iggy, by now sporting a hefty heroin habit had decamped to London with his new guitarist James Williamson. Unable to find suitable British musicians he decided to contact the Ashton brothers who were brought in on the agreement that Ron switch to bass which apparently didn’t go down too well with the ex-guitarist. Williamson was a slightly more orthodox player and in many respects was an absolutely brilliant guitarist but he did make the Stooges (or Iggy and the Stooges as they had now become) sound more like a souped up orthodox rock band.

The sound wasn’t helped by the mix by a certain David Bowie. In his defence Bowie claims that he was given three tracks to mix with, band, vocal and lead guitar and certainly that’s what it sounds like. Also contrary to popular myth the record was not all balls out rock, there’s a couple of ballads and a bit of bluesy shuffling like a more together Stones. So this is yet another Stooges a record which is a bit of a curates egg, ‘Search and Destroy’’ is a sheer classic followed by ‘Raw Power’ itself and it’s these tracks on which the album is usually judged.

This is all in retrospect of course, at the time even Bowie’s magic touch was not enough to garner much interest. The Stooges then recruited a keyboard player which is usually written out of history when remembering their guitar driven basic rock. The band came to a messy end when Iggy went on a local Detroit radio station and badmouthed some local bikers who then came to that evening’s gig and trashed the place. All this was actually captured on tape and subsequently released as Metallic KO. Even today this album is pretty hard to come by (and quite hard to listen to) but at the time it just served to add to the Stooges myth, being able to hear heavy implements bouncing off amplifiers in the comfort of your own home was enjoyable enough, assuming you were one of the 6 people who actually bought the record that is.

And so the Stooges were no more but just a few months later they were one of the most influential groups around. Steve Jones of the Sex Pistols for one was hugely influenced by their guitar work and any musician with a basic knowledge of chords and a bit of an attitude could approximate the Ron Ashton sound. The Pistols of course covered ‘No Fun’ and released it as the B side of ‘God Save the Queen’ making it by far the most listened to Stooges track in Britain.

And like the MC5 the Stooges had visited Britain long enough for us to get to know them (pictures of a London gig feature on the back of the Raw Power sleeve) but not long enough to become boring and indulgent and let us down. Also they were totally underappreciated by the mainstream and had the decency to split up before they could disappoint us.

Iggy, of course, went on to have a career which largely consisted of him making more albums which had a couple of really good tracks on them and a lot of filler. In many respects the music is almost a by-product of being Iggy, he is one of the most brilliant and mesmerising performers to this day, just watching him in action is enough.

And despite the drugs and the madness he is still with us which is more than can be said of his bandmates. He reformed the band in 2003 with the Ashton brothers and Steve Mackay. Original bassist Alexander missed out by virtue or having died years before from complications relating to his alcohol excesses. In 2009 Ron Ashton was found dead after a heart attack. Rashly but accurately Pop declared this was the end of the Stooges only to find that Iggy and the Stooges was now a going concern as James Williamson was back on the market. Williamson, possibly one of the most sensible people in rock, had retrained in electronic design and had been working quietly in Silicon Valley for years. Having proved very adept at this he was able to retire and go back to his old job. Drummer Scott followed in big brothers footsteps with a fatal heart attack in 2014 and Steve Mackay checked out in 2015 leading to Williamson to leave what was by now a rather profitable gravy train.

But in 1976 The Stooges were a potential blueprint for any band with attitude who wanted to make a noise. Their music isn’t that difficult but get the attitude wrong and the whole thing fall’s on it’s ass. What better blueprint for a young band of malcontent youths.

And there would be plenty of them in waiting.