It Was 40 Years Ago Today………Marquee Moon

I have to admit I love a guitar solo.For some reason I seem to have some mental problem with lyrics, I usually have a vague idea of what a song is about but ask me to repeat the words verbatim and I struggle. The exception to this, bizarrely is ‘Still Life’ by Van Der Graff, but I digress. For a long while I had difficulty accepting the unadorned singer song writer as I would wilt at the prospect of 10 verses with only an acoustic guitar for distraction. Time has mellowed me in that respect but in my opinion there’s very few songs that couldn’t be improved by the introduction of a well-placed guitar break.

Some guitar solos are awful but they are usually in awful songs so even there there is room for improvement, Slash, for example is guilty of a bit of excessive fretwanking but at least he’s providing a respite from Axel Rose’s catawauling ditto with anything by Oasis.

Normally the guitarist is having to shoehorn their contributions into just a few bars but there is a special palace in my heart for the kind of solo that just goes on and on with necessarily arriving at any particular destination.

The Americans started it all most notably with the San Francisco bands of the 60’s. I attribute it to them coming from a folk/blues/jazz background rather than rock and roll. This meant more flexible rhythm sections and guitarists who just a couple of years earlier had been grappling with acoustic 12 strings rather than Fenders and Gibsons.

The LSD probably helped as well.

And so we had the Country Joe and the Fish, Quicksilver Messenger Service, Jefferson Airplane and Big Brother and the Holding Company suddenly prepared to relax and stretch out despite, in some cases,a limited technique, all of a sudden they had imagination which could outstretch their physical limitations.

The very masters of this approach were the Grateful Dead and namely Jerry Garcia who, unprompted by one of the most sluggish rhythm sections ever could indulge himself with playing that would verge from formless to inspired and back again in the space of a song that probably lasted about a week.

It wasn’t long before bands like the gritty Paul Butterfield blues band were stretching out with ‘East West’. Neil Young pairing up with basic bar band Crazy Horse gave us not one but two extended guitar workouts on his Everyone Knows this is Nowhere’ LP.

Over in Britain Fairport Convention offered an extended Guitar/Fiddle workout on ‘a sailor’s life’ and conveniently invented folk rock in the process.

Prog Rock, of course, was full of opportunities the guitarist (and the keyboard player, violinist. Cello player etc.) to stretch out a bit but for me this is something slightly different, prog rockers tended to be skilled players who wanted to show how good they were and instrumentals were therefore more likely to be tightly scripted. For me the best long guitar solos are those that set off with no particular destination, it’s better to travel than to arrive. And; most importantly the best music is created when all the band is involved. If you listen to Neil Young with Crazy Horse you are listening to 4 musicians taking the same journey, Young is leading the way but on something like ‘Cowgirl in the Sand’ the rhythm guitar, bass and drums are all a vital part of the music.

As 1977 began to take shape this was of course becoming unfashionable overnight. There was some rather half-baked idea that expression had to be immediate and that spending a couple of years learning scales on the guitar marked you out as a cold hearted careerist. Songs became shorter and more lyrically direct and a guitar solo was about as useful to a band’s credibility as having a bass player with a beard or a singer in flared jeans.

And yet, at this very point there emerged a record with impressionistic lyrics and which featured a 10 minute song with twin guitar workout. And everybody loved it.

Marquee Moon has received almost universal praise from the critics from its release, February in USA, March in Britain, to the present day. So much has been said and written about the record I am not going to duplicate a lot of the details there’s a far better article than I could ever create here.

Marquee Moon has become the punk rock Sgt Pepper in fact ‘Astral Weeks’ would be a better comparison lyrically, but that’s not to deny it’s greatness.

Like Neil Young or Gerry Garcia or Richard Thompson, guitarist Tom Verlaine had his foils in the band. On second guitar (or was it first) Richard Lloyd was a more conventional and focussed player than Verlaine but the rhythm section was equally inspired and unorthodox. Drummer Billy Ficca was jazz influenced and although he was dealing here in regular rock rhythms he seemed to subvert them and play the unexpected, his explosive fills are most notable on ‘prove it’.

Fred Smith, the bassist, had been the last member to join, he did everything a bassist needs to do with a subtle line in subversion. ‘See No Evil’ was to be a great album opener setting the tone for the record with a thin clean sound (fender guitars, fender amps according to the inner sleeve picture), it was familiar and yet new and exciting. Radio presenter Mark Radcliffe later noted that the band were like a string quartet, each member had a distinctive role which was interwoven with the others.

Everything about the record was great, it looked great, and it sounded great. The only critics were Lester Bangs in America who found it too reminiscent of the Grateful Dead and Julie Burchill in Britain who was in the process of re writing the history of music. In the NME the ever reliable Nick Kent raved about the record over two pages, I was hooked, I bought my copy (at full price!!) and played it to death. 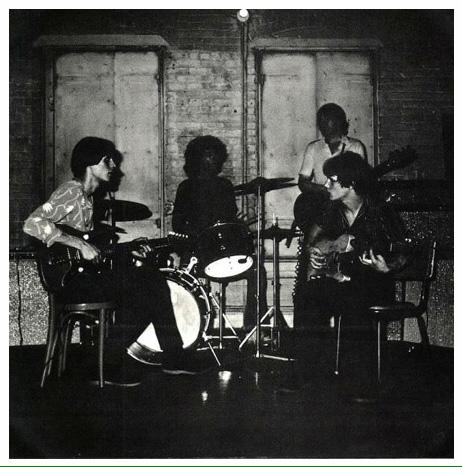 The important thing about Marquee Moon was that it pointed a way forward to a music style that was beyond three chords played badly. The old regime had needed to be dismantled but we hadn’t really replaced it with anything of lasting value yet. Marquee Moon was to influence post punk bands like U2 and Echo and the Bunny Men and so on to the Pixies and The Red Hot Chilli Peppers.

It’s fair to say that Verlaine was not the most prolific or creative of writers but it’s almost as if all we needed was the one record. The follow up ‘Adventure’ was fine but it wasn’t quite as good as Marquee Moon, if the band had recorded them in reverse it’s likely we would have a finer appreciation of their sophomore record.

And the next year they split.

By and large the band were pretty unappreciated at home outside the hipster east and west coast areas of the states. They were well appreciated in Britain but as all musicians know, that’s a miniscule market. The band have occasionally reformed and did record another record (yeah it was fine). Richard Lloyd has now left although whether the band actually exists anyway is open to debate but whether or not they appear on any stage again, they are now in their late 60’s, is perhaps immaterial.

7 Responses to It Was 40 Years Ago Today………Marquee Moon