At the end of last year I told the tale about how I missed the Anarchy tour by virtue of the initial gig being cancelled just hours before it was due to take place at the University of East Anglia. That was out of my hands, and a bit of a relief at the time I must  admit. However just months later I missed another seminal gig, and it was all my fault.

The whole sorry affair says a lot about my life in late 1977 but also a bit about the weird home life of my family. By October a lot of my friends had left and I was having to dig deep to find new friendships. Just about to turn 19  friends were important to me, I had to get out of the house!

On the night in question I was wearing my dad’s coat. This will become significant. My dad being generally unwilling to spend money on anything that wasn’t mechanical had invested in two identical coats one for me which medium and one for himself that was large. This had been some time ago but one coat was enough for anyone apparently. I however had now grown to accommodate a large coat and so, quite naturally, had taken to wearing my dad’s over garment . My dad had been working for a while now at Rowntree Macintosh, one of the few big factories in Norwich. He seemed to like this as he was always working, evenings, weekends, he was either at work or just going to work or just home from work. For months I never saw him out of a boiler suit, he never had time to wear the coat I had appropriated anyway.

And so on that fateful night I went out in my dad’s coat but on my own bike. I had come to hate cycling but really it was the only way to get around Norwich and I was going to the University which would have necessitated two buses each way which would have taken hours. I met up with a guy, lets call him Paul, nearly everyone I knew was called Paul, who was kind of a friend but not a close friend, I don’t know why we were meeting up or what we were intending to do or why we went all the way to the University but we did. Paul was a bit older, a nice enough guy but a bit more edgy than my usual friends. At some point it was rumoured he had a girlfriend and child which he had left in some godforsaken village while he escaped to the bright lights. He was now seeing, or about to see, another friend of mine but she wasn’t around that night, it was just me and Paul.

At some point in the evening I located a wage packet in the pocket of my dad’s coat. I wasn’t really surprised, although he would have a fit if you ran a hot tap for more than 5 seconds when it came to the folding stuff he was surprisingly lackadaisical, after he died we found a small fortune in £20 notes stuffed in a drawer and so he had left his weeks earnings in the pocket of his coat. As someone who hadn’t had to work a 70 hour week in sweltering temperature I was not really concerned, all I had to do was get the money back safely by tomorrow, no harm done.

At some point Paul suggested we try and score. I was impressed I wasn’t a drugs virgin, I had an Iggy and the Stooges album after all, but I found that cannabis, because that was all we ever used of course, did very little for me apart from make me feel sick as I didn’t smoke tobacco at the time. Anyway this was a chance for some excitement, it had been a dull night so far and so Paul disappeared somewhere  to do a deal. I was, of course pretty drunk at this point, truth be told I was always pretty drunk if I was out and so I waited quite peacefully for a bit of time until Paul appeared.

Paul eventually arrived without the anticipated minuscule piece of resin but instead he had a few pills in what looked like a prescription bottle. He gave me a few and I washed a couple down with some more beer and pocketed what was left.

I cant remember anything else about the night but at some point I decided to go home, jumped on my bike and peddled off into the night. At some point on the journey home I felt a bit tired and decided to have a break and look into a shop window. I was on a main road but it was very quiet. Out tof nowhere a police officer appeared wanting to know what I was doing. Clearly a young man with long hair and a bike looking in a shop window was serious cause for suspicion. Unfortunately he became seriously suspicious by my reply and insisted in searching me. He could barely contain his excitement when he discovered  a couple of pills and a wad of cash, suddenly I was surrounded by a hoard of the forces finest who also appeared from nowhere and and bundled me, and my bike into an awaiting paddy wagon that had also appeared as if by magic.

There then followed a night of horror. There were little in the way of rights for the potential felon. I don’t know how long I was held for but it was a long time without food or rest or the offer of a friendly solicitor. I was strip searched and had my back passage more closely investigated than at any time before or since. My house, or more accurately my parent’s house, was searched causing even more excitement when they saw my bedroom crammed with a variety of musical equipment.

Eventually they bailed me to report back in a few weeks time and called for my dad to come and collect me, and my bike. I don’t know why, I was an adult after all but it seemed to be an essential part of the humiliation.

I was terribly ashamed, largely because I had got caught. I couldn’t tell any of my friends, I suspect that Paul probably had some form anyway but I had kept his name out of proceedings, I don’t think for a moment the police believed the story I told them but I had occupied half of the Norfolk force for most of the night, I think they were glad to see the back of me. My parents, although shocked, seemed to get over it but, of course I couldn’t even acknowledge that people in their early 50’s could have feelings, it was my peer group who I was really concerned about. I felt that at some point I would have to go to court and then I might be in the local paper, then my life was over, being busted would just be proof I was an idiot. Even the prospect of it effecting my career chances seemed remote although I realised the possibility of going to prison was really frightening. I felt that the probability would be that I would be fined so with that in mine I started saving out of my dole and Saturday gardening job I had inherited from friends who had departed to university.

And saving meant cutting down on spending so less drinking and less gigs.

This was why I missed the Live Stiffs Tour which hit the University of East Anglia sometime in the next few weeks. It’s probably the gig I most miss missing, 40 years on it still hurts. 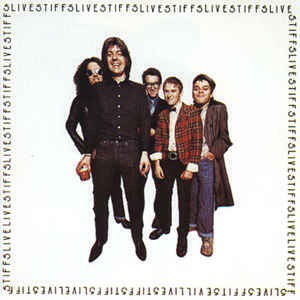 Serves me right for being a selfish and stupid young man of course. You may have noticed that at no point did I even ask what those pills were, I suspect they were valium but they could have been anything, I didn’t even bother to ask before I necked them.

But that’s youth for you.

I don’t know how long the legal process took, everyday I would wait for the mail and eventually, some weeks later a manilla envelope arrived. All charges had been dropped and I did not need to attend bail. That was it, no further information was deemed necessary, if it happened today I’d probably be sent a leaflet telling me how to make a complaint but this was the 70’s they’d probably lost the paperwork by the time the charges were dropped.

And they did give my dad his wages back by the way.