It was 40 years ago today–Jilted John

The accepted norm of rock music is that English is the best language to sing in. It depends on the song of course, if the aim is emotive tear-jerking then Spanish, of even Portuguese might be a good choice. It’s surely not just an eye on sales though that requires most rock groups sing in English wherever they are from. To take things a step further it is American English which is the best for the rock and roll voice. Let’s face it, they got there first and they do it best. It’s the vocabulary, as a young man I was enthralled by Don Mclean taking his ‘Chevy to the levy’ and could there be any better ice breaker than Steve Earl’s ‘hey pretty baby are you looking for me, I’m your good rockin daddy down from Tennessee’ , I think not.
Then there was the subject matter, the Wichita Lineman seems so much more romantic than the Sunderland cable installer. I once considered a substantial detour in the USA just so I could stand on the corner of Winslow Arizona just like Jackson Browne had done. I don’t feel that compulsion in Britain.
Every now and again though there is an artist determined to sing in their speaking voice. To be fair, the fab 4 despite being enthralled by all things American were prone to slide into scouse vernacular now and again but like so many things the introduction of the British accent only really took off post punk.
To be brutally honest there was a brief period when we really hated the American’s. It didn’t stop bands touring there but, a bit like playing to students’ it was just something they had to do. The Clash were instrumental in this antagonism recording ‘I’m so bored with the USA’ on their debut record. A band who wanted to have their cake and eat it, the Clash then plundered American music forms which is probably not unconnected with them being the most successful Punk Band.
And so, 40 years ago, while we had fallen out of love with the states, we were treated to a prime slice of northern English pop music curtesy of Jilted John.
Jilted John is an apocryphal tale of how punk had blown the music world wide open. John was in fact drama student Graham Fellows who had written a couple of somgs and decided he would like to do more with them than just play them to his friends. With a view to recording his masterpieces he went to the local record shop in Manchester and asked for advice. He was told there were only two independent record labels. Stiff in London and Rabid in Manchester. He decided to save himself the train fair and headed to Rabid. The label told him to record a demo which he did and they loved the music and wanted to release a single.
Freshly re-recorded the single was issued with ‘Going Steady’ on the A side backed by ‘Jilted John’. The B side was more immediate and after an airing on the John Peel show EMI decided they wanted to put their corporate weight behind it and suddenly Jilted John was singing ‘Jilted john’ on Top of the Pops.

I’ve been going out with a girl,
her name is Julie
But last night she said to me,
when we were watching telly
(This is what she said)
She said listen John, I love you
But there’s this bloke, I fancy
I don’t want to two time you,
so it’s the end for you and me
Who’s this bloke I asked her
Goooooordon, she replied
Not THAT puff, I said dismayed
Yes but he’s no puff she cried
(He’s more of a man than you’ll ever be)
Here we go, two three four
I was so upset that I cried,
all the way to the chip shop
When I came out there was Gordon,
standing at the bus stop
(And guess who was with him? Yeah, Julie, and they were both laughing at me)
Oh, she is cruel and heartless
to pack me for Gordon
Just cos he’s better looking than me
Just cos he’s cool and trendy

Clearly, it’s ‘not sad eyed lady of the lowlands’ but it contains word that Chuck Berry never utilised ‘mate, telly, puff and chip shop’ to name 4 of them.
It’s also noticeable that there was no twitterstorm over the derogatory use of language towards homosexuals and women. It’s all offset by the fact that Jilted John is clearly a whiney looser but no one even felt the need for discussion in 1978, this was everyday language.

Jilted John got as far as making an album True Love Stories which featured more of the same including a track about his pet mouse. He re-recorded ‘Jilted John’, this was an inferior version featuring keyboards which were, by then, taking over the world. Strangely enough he also sounds like Peter Perrett from the Only Ones when he chooses to sing a bit deeper from his usual rather abrasive range. 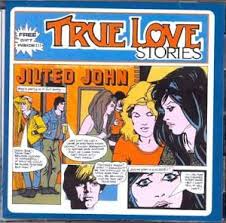 I have never listened to True Love Stories until now, that’s how much I care for my readers. In retrospect Jilted John is best listened to once for the duration for his titular single. It now sounds like a comedy record but at the time it was quite a breakthrough in terms of an English voice (even if it was the voice of someone who was essentially an actor).
Suddenly we were besieged by English voices singing about English lives, Squeeze, Wreckless Eric and eventually the Smiths, Blur, Belle and Sebastian (Scottish I know!) and plenty more were singing about pubs and chip shops and busses. Traditionally they were/are much loved in Britain and pretty much ignored in the USA which seems a bit unfair considering the way we adopted Bryan Adams (Canadian I Know!!)
Fellows being an actor went on to do acting roles like Coronation Street. He also created the comedy character John Shuttleworth who seems to be big on radio 4 where the word ‘comedy’ is frequently preceded by the word ‘gentle’. Weirdly though he is about to reprise the Jilted John character for a 40th anniversary tour which seeing that he is now in his late 50’s could be a bit inappropriate but each to his own. He also lives in Louth Lincolnshire, which I think is also home to Robert Wyatt, and has converted a church in Orkney into a studio. I know all this because I caught him on the Ken Bruce show* doing ‘tracks of my years’ which serves as a testament to his continued popularity as a ‘one hit wonder’

* as a point of reference to my international readers, Ken Bruce, an avuncular and seasoned broadcaster runs a popular midmorning show on Radio 2. The music barely strays beyond the 80’s and I’m sure he plays ‘Bat out of Hell’ at least three times a week. I love him.

Like Loading...
This entry was posted in memories of 70s, rock music and tagged jilted john, John peel, ken bruce, manchester, one hit wonders, punk, top of the pops. Bookmark the permalink.

4 Responses to It was 40 years ago today–Jilted John