Camembert Electrique the third, but first real, album by Gong was released in 1971 when, to be honest I wasn’t really ready so I missed out on the offer of a whole album for 59 pence. However a few years later I came across the record in a junk shop for, wait for it 59 pence.I was probably provoked into a decision to purchase by the fact that the record hadn’t lost value and so I bought it. It wasn’t an easy decision after all it still represented two hours of sweated labour in my Saturday job but in the end it represented money well spent.

Gong, the real Gong not the jazz funk Gong of later years centred on Daevid Allen a man for whom the words ‘one off’ just cant do justice. Allen was Australian which probably allowed him to get away with the sort of hippie bollocks that Gong traded in. Allen had already had an amazing life having travelled Europe, made some influential connections in the art world, formed Soft Machine and then being deported from England for being an Australian Hippie. He ended up in France where his weirdness was allowed to blossom

Despite not being the greatest guitarist, singer or songwriter on the planet he had no shortage of like minded people to play with and perhaps more surprisingly to fund his creativity. Camembert Electrique was recorded at Chateau d’Herouville near Paris. Virgin eventually issued it for 59p which meant an awful lot of people seemed to have it and a few actually liked it

There was a lot to like, the music varied from riff based rock enlivened by ‘space whisper’ (Allen’s partner Gilli Smyth) and flute (Didier Malherbe) to tape experiments. The amazing thing about this music though was that like a lot of 60’s and 70’s music it seemed to have no precedent at no point could you really say ‘this sounds a bit like….’

But music aside (and like the Grateful Dead Gong were always about so much more) what really impressed me was the record sleeve. On the front was a proper drawing made with real pen on real paper but it was a simple black and white photo on the back that used you grab my attention while listening to ‘Fohat Digs Holes in Space’.

The band are posed against what I assume is their communal farmhouse in the wilds of France, its a bit muddy, there’s even rabbits in hutches behind them

On the far left is Didier Malherbe (Bloomdido Bad De Grass) saxophone and flute player. He’s almost out of the picture but at this point he’s a major force in making Gong Gongier  not yet 30 he looks a lot older but being French that’s of little consequence.

Next in line is Christian Tritsch (Submarine Captain) who plays Bass but really wants to be a lead guitarist which means he will soon be a footnote on the Gong story. I always liked the Submarine Captain largely because in this picture he’s got a cool hat and seems to be wearing jodhpurs..crazy guy.

The next band member is really just passing though which means he never gets a a nickname. Its Pip Pyle, a great drummer and part of the Canterbury scene. Allen never really understood drummers and over the next few months they come and go (Pyle actually returns later). Pyle looks like he’s tripping over Sam Wyatt, son of Robert who, strangely enough, is the only one actually looking at the camera.. Luckily Sam’s positioning hides the fact that Pyle is actually wearing stockings which is horribly apparent in the colour out takes of the session. 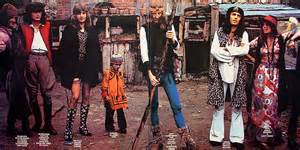 Eddy Luisse is the mystery keyboard player who again wont stay and wont have a nickname.He is the only one who looks a little uncomfortable despite being the most sensibly dressed.

Last, but not least is Gill Smyth (Shakti Yoni) who will always be on hand if you need a space whisper, Gong seemed to need quite a lot of it.

Gong went onto greater things for a while, due in no small part by the additions of Steve Hillage on guitar (who of course played with Alex Harvey at Glastonbury) and Tim Blake on synthesiser who both made the band distinctive and musical.

What I really really liked about Gong though was the fact that they existed outside the norms of music. They never got proper hair cuts or tried to record a breakthrough album or got stupid drug habits. For a long while they looked hopelessly out of time but they just stuck to their guns and inevitably they looked good again and managed to avoid and embarrassing history. Daevid Allen continued to make the music he wanted and appeared a remarkably active and able septuagenarian until his death from liver cancer earlier this year (2015)