Following the death of Marty Balin from Jefferson Airplane I have I been watching an unhealthy amount of videos on YouTube featuring the band’s founder and vocalist. I’ve followed Balin from good looking fresh-faced beatnik in the early Airplane (all the band look just great in 1967) to hollow eyed hippie at Woodstock. At Altamont Balin was literally the only person at the whole festival to come out with credibility when he jumped into the crowd to try and stop the Hell’s Angels beating someone up and was knocked unconscious for his efforts. All this raises the question why , by the time he had reached his 60’s was he dressing in the sort of middle America leisure wear that Donald trump would think twice about wearing on his day off .
The Airplane were inducted into the dreaded rock and roll hall of fame. It was widely considered that getting one of the most contrary bands together again was unlikely. Apparently whatever corporate whores run the whole event they were willing to spend a lot of time and trouble getting the individual members to the event (apparently they then let them make their own ways home). Guitarist Jorma Kaukonen bought a shirt and tie specially for the event and came across as some fort of groovy silicon valley entrepreneur. Balin looked like an insurance salesman from Ohio, the only person who looked like he might have once flown a freak flag was bassist Jack Casady who looked as weird in a tux as he did in hippie gear and headband. And what did the band decide to play in front of the record executives, only blinkin ‘Volunteers’ that’s what. There were so many levels of irony present I just wouldn’t know where to start unpicking it. The only person missing from the bizzare affair was band icon Grace, allegedly because of illness but also possible because she had ‘let go’ of her former identity. Slick is very much on record of the opinion is that rock should be a young person’s business’ looking at the beauty of the young Jefferson Airplane you could concede she’s got a point. 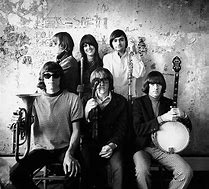 One of the weird things about getting old is the disconnect between who we think we are and what we appear to be. In the 70’s most of the middle-aged men around me had had a past life, they had flown spitfires or driven tanks in the desert or been in Japanese prisoner of war camps. Some of the older women had lost their husbands in WW1 and their sons in WW2. My grandad had fought at the Somme, both my parents had lived through the bombing of Norwich, my mum had lost classmates to childhood illnesses we forgotten about. All this counted for nothing to me because they were over 30.
Rock is now no longer a young person’s business. In the 80’s I used to patronise a record shop in Nottingham. It was a competitive environment with punks, goths and new romantics jostling for attention. An inappropriate choice of record could get the death stare from the assistant, my inappropriate hair and clothes would negate even a brilliant selection. Working away for a number of years my relationship with the shop declined and inevitably the shop decided to close, these events are probably not related. I returned for the closing sale and discovered to my amazement the clientele had aged with me, no more punks, no more goths just balding men in their 40’s.

And just like me, those men thought they were pretty much the same person they had been in the 80’s.

As I hit 60 the music world is a lot more inclusive than it was when I was in my 20’s. In fact, rock is in danger of becoming an old person’s getto. I say danger but really there’s nothing wrong with that in my book. Music now has to jostle for its place with other distractions. One of the reasons that we learned to play instruments in the 60’s and 70’s was the world was just so boring, there really was not a lot else to do, locking yourself in a bedroom with a musical instrument seemed pretty appealing. Most of the bands playing the pubs are 50 and 60 year old’s playing to their peers, folk clubs are pretty much a geriatric phenomenon, festivals rely on retired people to steward and attend, in twenty years’ time there’s a real possibility that that rock music will be a very specialist interest like traction engines or vintage cars or growing giant marrows.

There’s also a sense of satisfaction that those of us of a certain age can fell though of having been there as rock music blossomed, it’s been a good time to be alive.

There’s plenty of songs about the passing of time but the best ones seem to be written by young people. It’s kind of understandable, I think one is more concerned about death at the beginning of life than the end. Old people worry lots of things, its usually the fact that the post is late or it might rain later rather than their own mortality. Young people can see the big picture.
My time song was written by someone who was about 27 at the time. I’m not a big fan of Pink Floyd or Roger Waters but I will concede that Dark Side of the Moon is a classic album. It kind of debunks the idea that the Floyd were a prog group, DSOTM sounds more like Abbey Road Beatles than ELP to me. It’s a lovely warm sounding record where the group display song writing skills rather than showing off.

And the best song (‘Money ‘is the worst in my book) on the album is ‘Time’. There’s a great contrast between the two parts, one sparser and sung by guitarist Dave Gilmour and the other lusher and featuring a rare vocal by Rick Wright. For once there’s a real poignancy in Roger Water’s lyrics

Ticking away the moments that make up a dull day
You fritter and waste the hours in an offhand way.
Kicking around on a piece of ground in your home town
Waiting for someone or something to show you the way.

Tired of lying in the sunshine staying home to watch the rain.
You are young and life is long and there is time to kill today.
And then one day you find ten years have got behind you.
No one told you when to run, you missed the starting gun.

So you run and you run to catch up with the sun but it’s sinking
Racing around to come up behind you again.
The sun is the same in a relative way but you’re older,

Shorter of breath and one day closer to death.

Every year is getting shorter never seem to find the time.
Plans that either come to naught or half a page of scribbled lines
Hanging on in quiet desperation is the English way
The time is gone, the song is over,
Thought I’d something more to say.

How could such a young man write lyrics like this? It captures perfectly the tension between trying to make something of our life and the distractions that steal our time. It’s not straight forward of course, in retrospect some for the best moments in my life have been lying in the sunshine or staying home to watch the rain but there’s always that icy fear that I could have wasted my time writing that blog or watching Jefferson Airplane videos.

Happy Birthday to me !

PS I will be taking a week off, just giving advance warning in case any of you set your alarm clocks early for a Sunday just to read my blog.