Different from the Rest

The very thing that any band craves is attention or as most musicians would have it ‘a following’. Most musicians will tell stories of early gigs when the band outnumbered the musician on stage, it’s funny in retrospect but at the time it’s miserable. In fact bands need their followers much more than fans need a band so in the early days most musicians are quite willing to overindulge anyone who pays them any attention. If the band manages to grow the power balance starts to tip, the musicians have less time to hang out and bullshit with people they may not even like that much and as a result the original fans who find themselves side-lined start to get disgruntled and complain the band has ‘sold out’ as they now prefer rock star company over their old mates in the pub.So the fans or followers are all important, you can’t buy grass roots support but once something is happening which people are latching on to, a new sort of momentum starts to happen. With Punk it suddenly seemed that there were a whole lot of people who had been waiting for something to happen and when that something actually started they were so excited that they forgot that this might not even have been what they really wanted in the first place.

And so Punk, when it began to emerge, actually had quite a potential wide power base, there were a lot of Bowie/Roxy Music fans who had become disenchanted with their heroes becoming popular and famous and deserting them. There were fans of rock who had similarly lost interest in the Faces or The Stones for becoming big time rock stars. There were old hippies who wanted to feel part of something that had been lost since the 60’s, there were skinheads and boot boys who wanted something basic and exciting. There was an audience in waiting.

Away from the bomb sites and the squats lies the suburb town of Bromley one time home to David Bowie. I’ve never been there but it looks very much like one of the dozens of comfortable London commuter suburbs, the sort of place lampooned in countless TV sitcoms. But out in the suburbs something was stirring, notably a crowd of young people almost entirely Roxy /Bowie fans who enjoyed nothing more than dressing up and catching the train into the big city. Inevitably the suburban poseurs would be drawn to SEX on the Kings’ road and into the entourage of King Malcolm and his new band.

The Bromley Contingent as they would be termed were guaranteed to turn heads, these were the people who would perfect the ‘punk look’, safety pins, fishnets, liberty spikes and horror show makeup. Bondage and fetish gear that was only going to attract attention. You have to admire their courage and dedication, London was a tribal city, just being in the wrong place at the wrong time was risky enough let alone looking like one of the more extreme characters from A Clockwork Orange.

Shop assistant Jordan commuting all the way in from East Sussex every day to work at SEX described some of the problems.

‘I commuted for about two years. I had some real bad dos on the train. I had tourists trying to pay me for my photo…worse than that, mothers saying that I’m upsetting their children and debauching them and how dare I get on a train looking like that. Somebody tried to throw me off the train one day, literally out the door, so British Rail told me to go sit in first class, get out of trouble’ 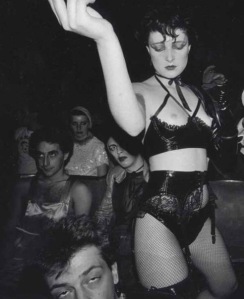 The Bromley contingent contained such notables as Souxie Sioux, Sue Catwoman and William Broad (soon to be Billy Idol) but in a way it’s the unsung members who were just as important at this point. The Pistols suddenly had the best crowd following since Andy Warhol picked up the Velvet Underground. It was fantastic copy for the media for a few months Souxie was famous for being ‘chick with tits out and a Nazi armband’. Even today she would turn heads but in 1976 it was possible to start a riot looking like that. The fans were at this stage probably more outrageous in their dress sense than the band they were following. Matlock and Rotten had some sense of style but the other two were fairly normal blokes who might be persuaded to put on a mohair jumper or one of Vivienne Westwood’s T shirts. Rotten is still smarting over the fact that the band actually had to buy their clothes from SEX albeit at a reduced price.

It was probably money well spent, other musicians such as Joe Strummer or Adam Ant have remarked about how the whole Pistol’s crew appeared as a whole package, a gang of people who appeared to all have the same identity and sense of purpose. It was all about image of course but from mid-1976 it was possible, in London at least, to see outrageously dressed young people hanging around the Kings Rd in proximity to McLaren’s shop. Within a year that handful of pioneers would have become an army. Japanese tourists would make their way to Chelsea just to take pictures of the exotic new breed.

By which time, of course, the originals would have moved on.

Like Loading...
This entry was posted in memories of 70s, prog rock, rock music and tagged bromley contingent, sex pistols. Bookmark the permalink.

2 Responses to Different from the Rest